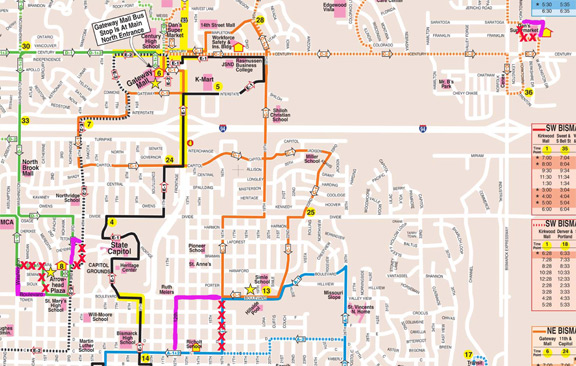 Bismarck, N.D. – Four routes in the Capital Area Transit fixed-route system will receive minor changes next month. The A-1, C-2, D-1 and E-2 changes will go into effect on September 8.

“With each of the route changes we are looking at either increasing our safety, or providing more geographic coverage,” said CAT manager Nate Vatnsdal. “As Bismarck and Mandan continue to grow we will always be conscious of trends and examining ways to make the service better for
the community.”

For the A-1 route, instead of turning south onto 16th, the route will run west on Boulevard for four more blocks, before turning south on 12th. Upon reaching Ave. C, the route will continue west along the traditional route. This change will eliminate some of the redundancy of coverage with the A-1 and A-2 routes, and will provide more access in that area.

With the D-1 route change, instead of having the bus turn north off Boulevard and onto 1st, behind Arrowhead Plaza, the bus would travel west on Boulevard and turn north onto Washington until joining back with the traditional route.

Finally, the E-2 route will travel west from 4th to 3rd via Teton, instead of Arikara, before traveling south and meeting up with the traditional route.

Bis-Man Transit, which includes the CAT (Bismarck-Mandan’s fixed route service), the door-to-door paratransit service, and the Jefferson Lines depot, combined to provide more than 300,000 rides for members of the community in 2014.